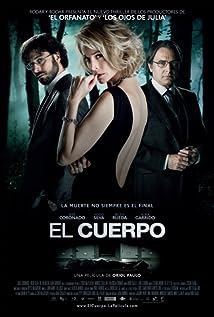 ‘From the producers of The Orphanage.’ This was the sentence that caught my eye on the press release, and which made me send an enthusiastic email back to the PR people, begging for a copy. Few movies are quite as creepy as The Orphanage, and it works (in my view at least) mainly because it’s so realistic: you can easily imagine the events actually happening to you. I was checking my cupboards for days afterwards.

The Body is more of a crime thriller than a creepy movie, but it still works. Alex’s wife has just died, but her body has disappeared from the morgue. There is no obvious sign of a break-in, and the only witness is the night guard, who is unconscious in hospital after running for his life and being hit by a car. Inspector Jaime, just back from Berlin where he tried to make contact with his estranged daughter, takes on the case. But how can a corpse vanish from a freezer without leaving a trace? Why is Alex behaving so strangely? It seems like something is being orchestrated behind the scenes. But in order to unravel the mystery, Jaime and Alex must both face up to their own demons, letting the skeletons out of the closet in the quest for truth.

It’s pretty gripping and I didn’t guess the twist, which are my two main points of judgement for any thriller. It doesn’t pack the same punch as The Orphanage; you’ll be able to sleep soundly after watching it; but when the twist was revealed I did say “Oh, that’s clever” and raised a glass to Paul Davis, its writer and director.

If you like fast-paced crime dramas, you’ll enjoy it. And it’s probably not too scary for the slightly fainter of heart, either. A good, solid all-rounder.

7/10 – A highly watchable crime thriller with a brilliant twist