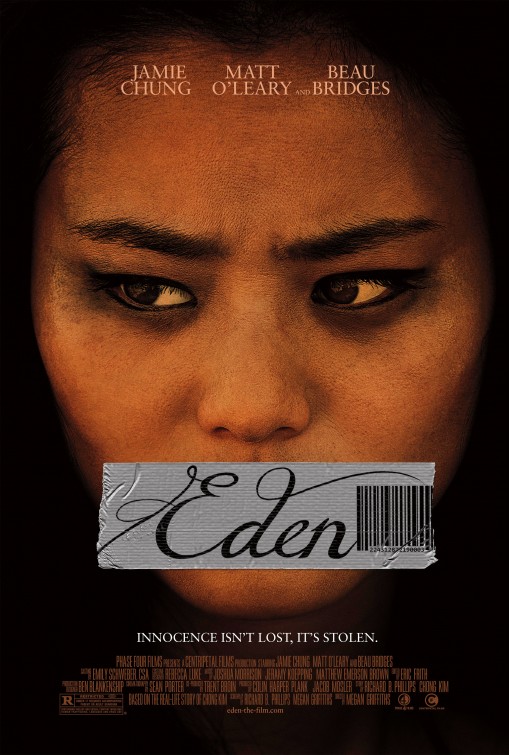 I put off watching this DVD because I thought it was going to be like The Seasoning House: ultimately OK, but too much gore and not enough storyline.

It opened with the sound of a woman screaming, and immediately cut to a shot of her bound and gagged in the trunk of a car. This only confirmed my suspicions.

But actually, it was surprisingly good. Perhaps because it’s based on a true story, and so there wasn’t the desperate overexaggeration of every aspect of the film.

Hyun Jae is a normal young Chinese American girl, living with overly protective parents. At eighteen, she’s dreaming of a bit of excitement, and so sneaks out with her friend Abby to a local bar. There, she meets a fireman who offers her a ride home when her friend goes off with another guy. But as soon as they’re on the road, Hyun Jae realises that the situation isn’t exactly what she thought.

She’s shipped to a warehouse where dozens of girls live in metal cells. She’s given a new name – Eden – and forced into the sex trade. Initially she can barely cope with the shock, and the only thing that keeps her going is her friend and cellmate Priscilla. After a while, though, she realises that the only way out is up, and she spends her time earning the trust of the people who run the organisation until she has a chance at escape.

It’s a compelling story. A bit of gore here and there, but for emphasis rather than shock value. The harsh reality of the girls’ lives is all too apparent when it’s clean and structured, rather than the rat-infested dumps you see in most such movies. Plus, it’s well-acted, with a stellar performance from Jamie Chung.

Worth a look if you’re a fan of tense thrillers.

7/10 – A well-acted thriller based on a true story